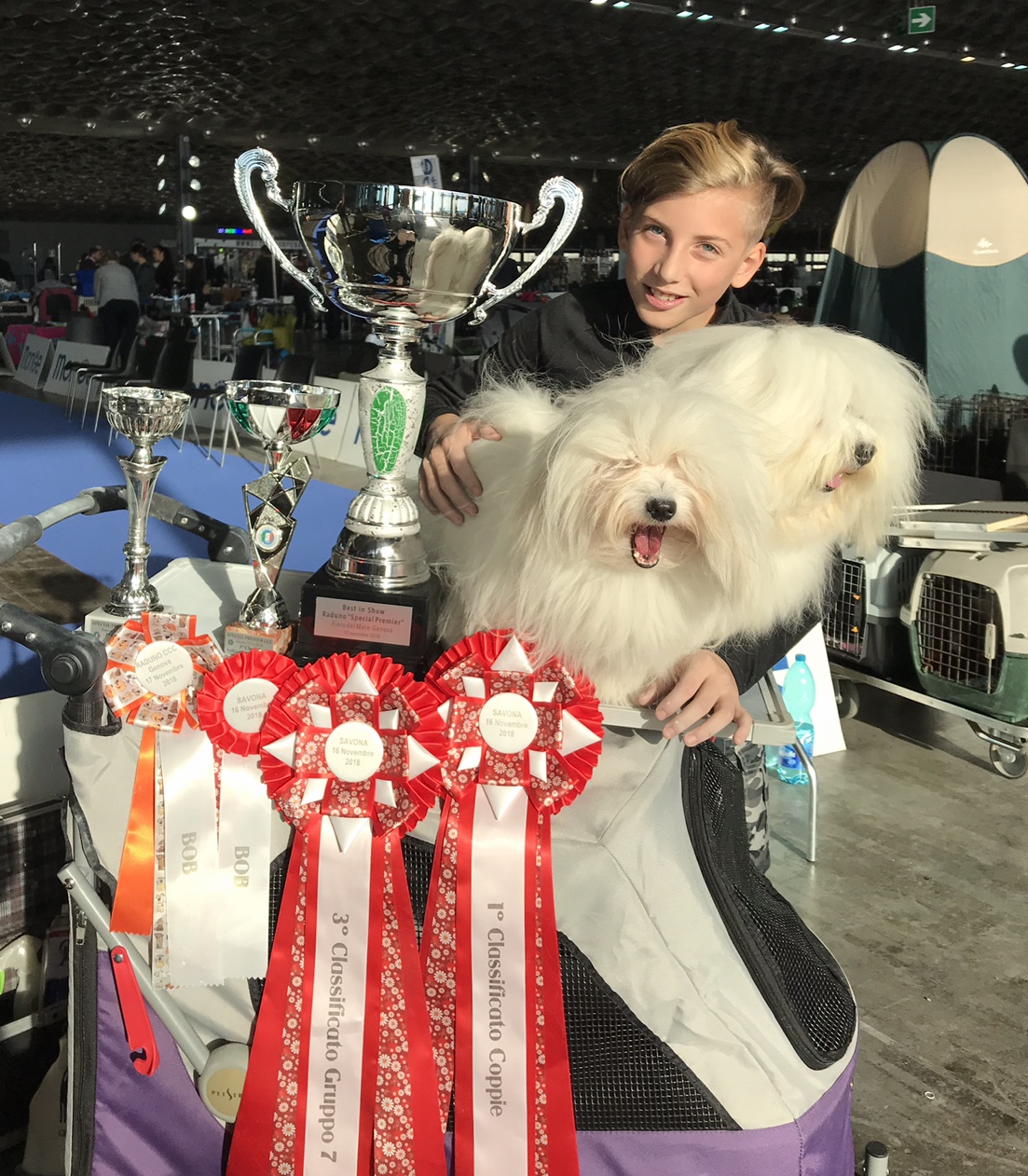 Winning a World Championship is something of indescribable. The first time I was near to win was in Nederland I believe, I remember there was a baronesse judging.I My young male was second and I was soo happy.

The first time I had a big winning was in Puertorico in 1997. The judge was Toy Specialist Kari Jarvinen from Finland.There were handlers from US and big breeders.. I had 4 dogs with me. Three of them become world champions, ROKANDROLL OF WOODLAND COOTAGE WW, my young boy RIFELIN LION KING was Best of breed and my young female COTONBRIE MAGIC WHITE ANGEL Best of opposite.. Beautiful exciting day!

In 2000 the World dog show was held in Milan. There were 80 cotons. The Judge come from Spain. My RIFELIN LION KING was Best of breed and Cotonbrie Only cream *Ow Nadia Formica), Enci winner.at WDS.

In 2001 we were in Portugal. My young girl, COTONBRIE RICH AND CHIC won junior world champion title. I remember that show where the judge Carla Molinari had hard time to decide within Rafia de ‘echo des Elingues and a nice female from Swift coton. Rafia and Reggaae won the adult titles.

In 2008 the show was in Sweden. We travelled there with dogs and my last son of few months. there were a lot of beautiful cotons. We had the privilege to get again three WORLD CHAMPIONS! The judge was Ana Kartes Ganami from Israel.The results: COTONBRIE BIANCAVEVE (owner Ilse Solar from Austria) was YOUNG WORLD CHAMP, COTONBRIE ANASTASIA WORLD CHAMPION AND BEST FEMALE and COTONBRIE VERCINGETORIGE WORLD CHAMP AND BEST OF BREED!

In 2011 was the YOUNG WORLD CHAMPIONSHIP of COTONBRIE EVITA, a mullti champion girl loved and owned by Vesna Marcovic in Serbia.

in 2017 the (judge Roman Stefanescu) our bred COTONBRIE MONTEWHITE was YOUNG WORLD CHAMPION, BEST OF BREED YOUNG, BEST OF BREED ADULT, THIRD ON GROUP IX BEST IN SHOW the owner who brought him to this and many other success is Joanna Rojeck from Poland. Beautiful COTONBRIE LADY GAGA top coton in Finland and multi champ WORLD CHAMP 2017. and best of opposite, Lady Gaga is loved by Teja in Finland who bought her to these great achievements.