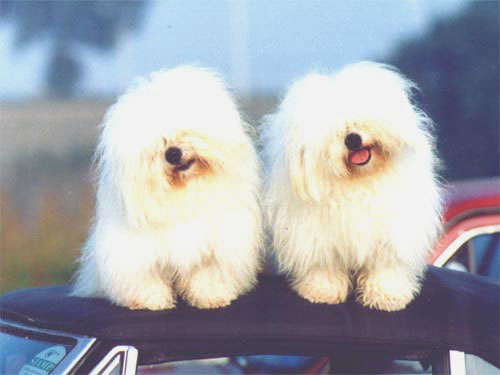 Everything started from a book. The fatal encounter was in 1984, leafing through the pages of a book, a photo of coton appeared: it was love at first sight. Cotons were very rare at that time and I wrote letters in french (without knowing the language) and I was impatient waiting many days for replies.. Later we discovered that the “Cupido’s Pic” was of Sarah Castex-Bindè cotons from France, where we had one of our first foundation females, Bemby de Guitelione. Other Cotons we imported in those years were Charlotte the Valuary’s Cottage from Nicole Chandelier,  again from France and Kissmegay of Woodland Cottage from Micky Ceriez in Belgium. All of them were related to the most winning cotons (Hutchinson du Domaine de Manakarra, Selimene de Gutelione, Cherry the Valuarys Cottage.. )  also if I must admit all of them were quite different one from the other and the breed was no means homogenous at that time.

It was a memorable fantastic period, plenty of family trips with my dad driving me all around Europe, with a convertible car, discovering countries’ beauty and visiting dog shows to study cotons and blood lines. All pedigrees of these years of Coton’s Europe pioneering are in my head. In Italy we were pioneering the breed, so I was used to go to the shows with the standard in my pocket, just in case the judge didn’t know the breed. We soon added other specimens like Lucky of woodland cottage, Moonlight of woodland cottage, All of them become champions.

We discover nordic countries after Monica Helm from Sweden who had our Cotonbrie Johanna Joannissima. Monica took great care of her and we become friends. That was a big step, nordic country cynophilie was very ‘futuristic’ respect the rest of the world and for me following that model has been a far-sighted perspective. We started to health check dogs and we learned a lot of evolute pattern of breeding.

Later on we added Rokandroll of woodland cottage a dog that conquered 28 titles, and Rifelin Lion King (aka ‘Kiwi”) from Finland (breeder Seija Vista) a milestone for Cotonbrie along with the puppies resulting from his beautiful brother Rifelin Julius Caesar, owned by Pia Stylmann. After Europe we went to show in the State, at that time cotons weren’t recognized by AKC so we showed and won Best in Shows under ARBA (American rare breed association), SKC, IIARB, and we won the two Clubs Specialities in Washington.

From US we flew directly to Puertorico World dog show were the Finnish judge Kari Jarvinen honored us of 3 World champions Rokandroll, ‘Kiwi’ and ‘Magia’ (Cotonbrie Magic white angel.

From there it was a florishing of cooperations with nice breeders from all around the world (in the section “worldwide” you find details) and many success were accomplished More than 700 titles all around the globe. See our “Champion” sections for details and pics. I’m sure some of you will find some traces in your country or even in your cotons pedigree.